So this race has quite a few adjectives in the title to describe it. Let’s start with great… Nope. American… Sure? Bacon… Yes. For starters we went into this knowing very well that it would be a silly race, but those are usually our favorites. Friday night we sat down to discuss the race plans like where we were going and what time we needed to set an alarm, then we realized the race wasn’t until 9AM!!! This is August! Doesn’t anyone realize 9AM is a terrible idea!!! Since we had paid and committed we went anyway. We sat in our car before the race with the AC on because it was already 90+ degrees outside. The race itself was well staffed with an OK cotton shirt. The first bacon/water stop was at Mile 1.5ish. The bacon was crispy and the volunteers were very nice. The second stop was past Mile 2 (which was marked incorrectly) and the bacon had gotten a little soft. The race ended up being barely 3 miles due to some sort of miscalculation. The line for bacon was also VERY long at the end so we decided to go home for some food and air conditioning. The medals were by far the highlight of the race. In the end, the bacon race is not on our list for next year. 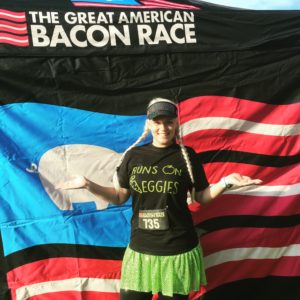